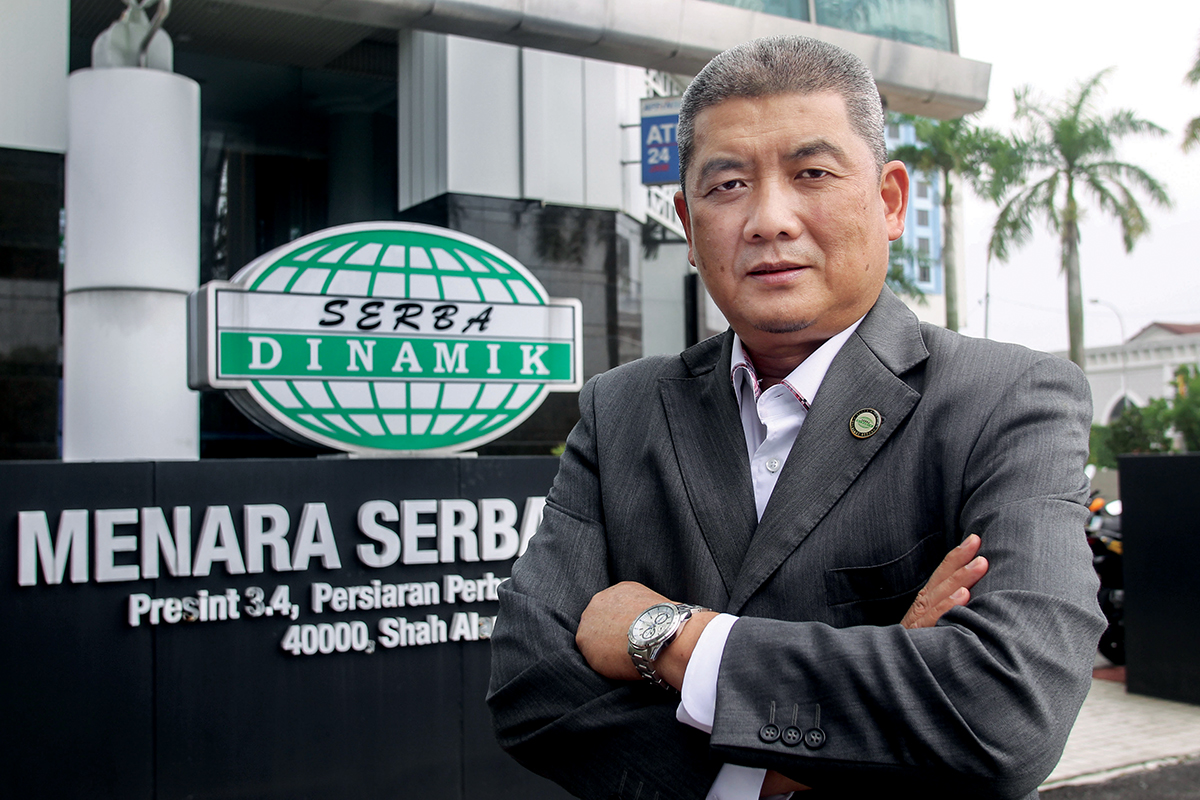 Serba Dinamik’s recent milestones and achievements are a testament to the group’s adoption of and continued expansion in the digital space. Its growth trajectory since it made its debut on Bursa Malaysia in 2017 parallels the digital transformation journey that the group has taken in recent years. “People often ask how Serba Dinamik has reached the level it has today. The group’s market capitalisation was RM2 billion when it was listed. Today, it fluctuates between RM5.6 billion and RM6 billion. It would be correct to say that technology has played a key role in the group’s growth,” says group managing director and CEO Datuk Mohd Karim Abdullah.

Established in 1993, Serba Dinamik, through its subsidiaries, is an international energy services group providing integrated engineering solutions to the oil and gas, petrochemical, power generation, water and wastewater, and utilities industries. It is involved in operations and maintenance (O&M), engineering, procurement, construction and commissioning (EPCC), IT solutions, and education and training.

For Serba Dinamik, the ultimate goal of technology usage is to improve the group’s efficiency, increase productivity of the assets it maintains and operates, as well as improve the performance of the organisation itself. “We have always believed in having our own in-house technology and, if we don’t have the technology, we acquire it through collaboration or mergers and acquisitions. And that’s what we have done and will continue to do,” Dato Karim says. By positioning itself as a technology-forward organisation, Serba Dinamik has also been able to attract and retain talent.

Serba Dinamik’s digital transformation journey began in 2005, when the group established its IT-related services. “During that time, we designed quite a number of industry software, especially for the oil and gas industry, such as safety and noise management systems to assist in the data recording and management of data in a digital form,” says Dato Karim.

The group’s big push into digitalisation commenced when it was listed in 2017, initially in addressing the needs of its day-to-day activities, particularly supply chain management. Barcoding, for instance, was used in stock and warehousing management, which was later complemented with radio-frequency identification (RFID). “These technologies allow us to track stock and equipment, helping with security as well as safeguarding the assets of the company,” he says.

Since those initial steps, the group has been advancing its digitalisation activities as part of efforts to grow its footprint in frontier technologies related to Industrial Revolution 4.0 (IR 4.0). “We’ve moved [into] and invested in IR 4.0 in a big way,” he says, adding that, in the last four years, the group’s tech investments have totalled RM55 million.

In the O&M business — one of the group’s core capabilities as well as major contributors to revenue — Serba Dinamik is employing data analytics and artificial intelligence (AI) to up its game.

“When we maintain the assets of our customers, we need to ensure that the assets are in good health and, to do that, we need a technique to analyse the data — for example, the flow rate, temperature and heat distribution — and come up with a diagnosis on the health of the asset. AI has proven to be a useful maintenance tool for this,” says Dato Karim, disclosing that such an approach has already been deployed for a few of its oil and gas clients in Malaysia.

The group’s subsidiaries Serba Dinamik Global Skills Centre and Serba Dinamik IT Solutions Sdn Bhd are also joining hands to revolutionise training and education to fit IR 4.0 demands. The fruit of this collaboration is the development of a Virtual Reality HSE Centre. The Immersive Technology development has also been expanded into actual industrial use through smart maintenance, which allows engineers to interact with the 3D model of the equipment.

In the past, the training for first-tier equipment, especially in the oil and gas industry, would require an expert to be physically present to conduct the training, and this would involve significant costs, including travel expenses. “But, now, the training can be conducted via virtual reality and augmented reality,” he says, adding that Indonesia’s state-owned oil and gas company Pertamina is the first of its clients to sign up for this revolutionary training approach.

Beyond its core businesses, the group is also exploring ways in which digitalisation and related frontier technology can be used for the consumer market. “This is a departure from our traditional institutional market,” Dato Karim concedes, pointing to the vast potential, given the global population of 7.7 billion. “We feel that tapping into the consumer segment would offer a lot of returns to Serba Dinamik, and the way forward is through the development of apps.”

One of these is Qwik Pay, a ticketless and cashless payment solution rolled out at end-2018. Initially developed as a parking management app, with the onset of the Covid-19 pandemic, the e-wallet has since expanded its use to the retail space. Its subscribers have also grown significantly to 50,000, with 15,000 of them signing on in the last four months. The number of Qwik Pay subscribers is expected to jump exponentially in the near future, following a recent deal signed with an Indonesian province boasting a population of 18 million.

In July, the group also opened the Virtual Reality Park located in Kota Samarahan, Sarawak, to visitors. The park comprises VR entertainment rides, an innovation lab and an eSports Centre. The last is aimed at igniting creativity and innovation among youth while the innovation lab serves as a platform for start-ups to test their products and solutions and network not only among themselves but also with Serba Dinamik’s innovation labs and partners in India, China and the US.

The group’s embrace of technology and its ability to innovate and adapt to market challenges using technology have made the way for its continued growth. During the 2019 financial year, Serba Dinamik secured sizeable O&M and EPCC jobs across Central and South Asia, the Middle East and Southeast Asia.

Earlier this year, Serba Dinamik bagged a US$1.78 billion (RM7.71 billion) contract for the engineering, procurement and construction of an innovation hub, academic campus, related facilities and IT infrastructure in Abu Dhabi, the United Arab Emirates. On the heels of the win, the group bagged 10 new contracts, including three worth an estimated RM543.5 million in Indonesia and Zambia. For the first quarter of the year, Serba Dinamik’s year-on-year revenue grew 30%, driving profit higher to RM134 million.

As an engineering solutions provider, technology and the use of state-of-the art technologies are part of its DNA. In the coming years, the group expects to continue to expand digitally, particularly in IR 4.0 technologies. By capitalising on its track record and expertise gained over the years, Serba Dinamik is also poised to play a leading role as the country embraces digitalisation across various industries.

To that end, in early May, Serba Dinamik signed a memorandum of understanding (MoU) with Malaysian Technology Development Corporation to foster collaborations in the digital start-up ecosystem in Malaysia to provide guidance and mentoring to budding entrepreneurs for innovative transformation. Among the areas the group is exploring through the MoU is the application of 3D printing for the construction industry.

The group is also working with a few agencies and financial institutions in the development of smart farming in Malaysia. “We are not positioning ourselves as an agriculture company, but we have technology that can transform farming practices. We feel that, if farming methods can be revolutionised, the younger generation will be attracted to venture into farming,” says Dato Karim.

He adds that the adoption of the Internet of Things and the use of drones, autonomous vehicle technology and e-commerce solutions to close the gap between farmers and consumers have the potential not only to modernise farming but also increase yields.