KUCHING: Malaysian companies undertaking overseas projects have to ensure that they deliver what have been promised to protect the good name of the country.

This is what Serba Dinamik Holdings Bhd has been doing, according to its group chief executive officer Datuk Dr Mohd Abdul Karim. 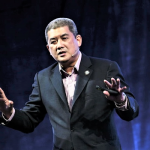 “As a (Malaysian) enterprise, we (Serba Dinamik) make sure that Malaysian Flag is being taken care of. Whatever we do, we deliver in overseas projects.

“We feel we have something to contribute to the country,” he said during question-and-answer session at the 2019 Sarawak Investment and Business Summit at Kuching Hilton here on Monday.

Mohd Abdul Karim was one of the panelists on ‘The Future of Sarawak — What Next: What Lies Ahead?’

Saying that he has no politicial connection, the business tycoon said he had built up Serba Dinamik over 26 years of hard work.

Today, Serba Dinamik has a global footprint, having expanded its business beyond Malaysia to a dozen countries in Asean, South East Asia, Central Asia and the Middle East.

Serba Dinamik has a market capitalisation of some RM6.25 billion. In first half 2019, it posted group net profit of RM242.6 million on revenue of RM2.12 billion, which was sharply higher over RM196.5 million and RM1.53 billion respectively in H12018.

Sharing his vast business experience with summit participants, he said for any entity, be it business, political or academic, it is vital to build a strong foundation.

“As a company, we put importance on technology whether to build it in-house and having to improve it.”

Mohd Abdul Karim said it is also important for business enterprises to contribute back to the community via corporate social responsibility (CSR) programmes.

With a strong state reserves of over RM30 billion, he said this has enabled the state government to increase its budget for development, especially on infrastructure.

He commended Sarawak government for implementing its digital initiatives to spur economic growth, and urged all strata of society to support the digital economy.

According to him, Singapore and Hong Kong have been successful in attracting foreign investments because of their digital technology and infrastructure.

On Sarawak government’s investment in the billion-ringgit methanol plant project in Bintulu, Mohd Abdul Karim described it as a “smart move” to develop the downstream industries in the oil & gas industry.

The proposed currently under construction is expected to come on stream in 2023. It has a production capacity of about 1.7 million tonnes per annum.

Mohd Abdul Karim said the unity of Sarawakians irrespective of their ethnic origins and religious backgrounds is a unique Sarawak feature that is the envy of Malaysians from outside the state.

After the election, politicians should put aside politics and joint efforts to develop the state, he said.